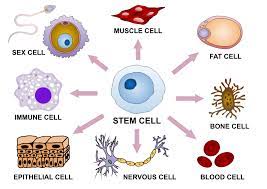 It is fascinating to know that division of labour exists among our body cells. That is why the cells in the eyes are different from the cells found in the brain and liver. Each of these cells performs a different task to foster the body’s effective functionality.

Cell differentiation is the process by which living cells formed in the embryonic stage during the fetus development differentiates into many types in order to carry out different functions of the human body.

The precursor cells that differentiate into other cells in the body include:

The embryonic stem cells are produced in the embryo during fetal development while the adult stem cells are found in three main parts of the human body: bone marrow, adipose tissues and blood. They are undifferentiated cells that have the ability to divide into different somatic cells in the living organisms and divide by mitosis

During embryonic development, germ cells are produced in the primitive streaks of the embryo and migrate through the gut of the embryo to the developing sex organs (gonads) where they are differentiated into either egg or sperm cells and divide by meiosis.

All living cells in the human body, both the ones in the brain, heart, intestine, lungs, liver and muscle carry the same genome (a complete set of the human genetic material). But these cells have distinctive shapes, sizes, and colours. The reason being that certain genes are repressed in some cells while certain genes are expressed through a process called gene expression.

Hey there,
I am Olatomide Samuel, a microbiologist, blogger, graphic designer, web designer and an entrepreneur. I currently manage ATG Ventures, an internet company that deals in the sale of airtime, data bundle, cable tv subscription, Waec result checker. Feel free to go through our articles and kindly endeavor to patronize us.