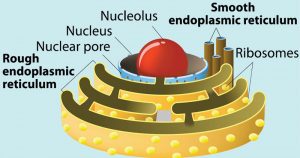 Inside the eukaryotic cell is an organelle called endoplasmic reticulum which is responsible for packaging and sending proteins and lipids around the cells. It is an interconnected network of flattened membranes enclosed tube-like structure known as cisternae. Not to be confused with Golgi apparatus.

There are two types of endoplasmic reticulum:

Endoplasmic reticulum is connected to the nuclear membrane and other organelles that make up the Endomembrane system, a group of different membranes suspended in the cytoplasm in eukaryotes.

Organelles that makeup the endomembrane system include:

Each of the above listed organelles transports proteins and lipids within the cells.