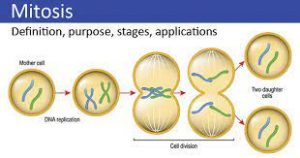 Mitosis is a type of cell division occurring in the somatic cells (body cells). The brain, eye, heart, skin cells all multiply by mitosis. Emphasis will be laid on cell organelles such as centriole, nucleus and cytoplasm in this article.

Centrioles are located in the animal cells cytoplasm near the nuclear envelope. It is made up of short microtubules triplets arranged in a cylindrical form. It plays a major role in the cell division eukaryotic cells.

Inside the nucleus are chromosomes that are made up of DNA and histone protein. Each chromosome in the nucleus is joined together at the middle by a structure called centromere. A pair of chromosomes is known as chromatid

Interphase is divided into three (3) types:

Somatic cells grow and function normally at the G1-Phase. Synthesis/ replication of DNA occurs at the S-phase via a semiconservative method of DNA replication. Chromosomes also double at this stage. G2-phase is the final stage of interphase, where the somatic cells prepare for the mitotic division.

The process of mitosis can be summarized in the following

Karyokinesis is divided into four (4):

This is the stage that follows the cell G2 stage of interphase during the cell cycle. At this phase, the cell prepares for division by condensing its chromosome and initiating spindle formation. The chromosome is visible at this stage.

At this phase, the chromosome aligns on the spindle at the centre of the nucleus. Spindles are fibre that helps to move the chromosomes on the dividing nucleus towards the opposite direction.

At this phase, sister chromatids separate and move opposite direction on the pole of the spindle.

This is the final stage of karyokinesis. The chromosomes reach the pole on the spindle and the nucleus divides into two.

Telophase is promptly followed by cytokinesis, the division of the cytoplasm. Thus, leading the production of two identical daughter cells.