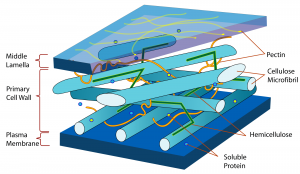 All living organisms are made up the smallest structural, functional unit of life called Cell. There are two major types of cell: the prokaryotic cells and the eukaryotic cells. The external cover of a living cell is known as Cell Wall.

Most prokaryotes are bacteria. Bacteria are the smallest organism after viruses. The cell wall of prokaryotes are rigid and strong due to the presence Murein (Peptidoglycan), a polysaccharide chain cross-linked at regular intervals by short chains of amino acids. The sugar component of peptidoglycan are N-acetyl glucosamine and N-acetyl muramic acid joined together by β-(1,4)-glycosidic bond, while the amino acids are five in number viz: L-alanine, D-glutamine, L-Lysine, D-glycine (or Diaminopimellic acid in E. coli) and D-alanine.

The cell wall of bacteria is essential for their survival in their respective environment. In 1884, a Danish biologist named Christian Gram developed a staining technique that helps to divide bacteria into two groups: Gram Positive and Gram Negative bacteria. During the former are stained purple while the latter are stained pink.

Protoctista Cell wall: The animal-like protist such as Amoeba, Euglena, Paramecium and Plasmodium species lacks cell wall while the plant-like algae have cell wall composed of polysaccharides such as glucans and varieties of other glycoproteins.

Fungi Cell wall: Fungi cell walls are different from other eukaryotes cell walls in that they contain Chitin (composed of unbranched β-(1,4)-linked – N-acetyl glucosamine) or Chitosan (containing poly-β-(1,4)-linked – N-acetyl glucosamine) as well as glucan (A polysaccharide joined by glycosidic bond) that link the chitin or chitosan together and structural proteins.

Plant Cell wall: The plant cell wall is made up of three layers: the primary, the secondary cell wall layer and the middle lamella. The primary layer is a thin, flexible layer formed while the plant is still gowning, the secondary layer is thicker containing lignin that make the cell wall to be water proof while the middle lamella is outermost portion of plant cell wall, it is rich in pectin and responsible for linking (gluing adjacent plants cells together).