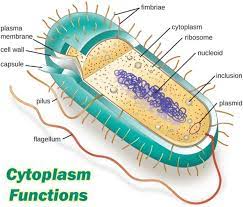 The cytoplasm is a portion of the cell surrounding the cell genetic material (Nucleoid in prokaryotes or nucleus in eukaryotes).

The major components of the cytoplasm include:

The cytosol is a jelly-like fluid that makes up about seventy percent of the cell; with about sixty percent water and ten percent protein filaments called microtubules which is responsible for the cell cytoskeleton (a complex network of protein filament, that plays a role in maintaining the cell shape).

Organelles (literally means “cell organs”) such as endoplasmic reticulum, Golgi apparatus, lysosomes, mitochondria, ribosome, vacuole and chloroplast (in plants) are suspended in the cytosol of the cytoplasm.

These are small particles of small insoluble substances that are suspended in the cytosol of the cytoplasm. These substances can either be calcium oxalate, granules of energy storage materials starch, glycogen or lipid droplets.