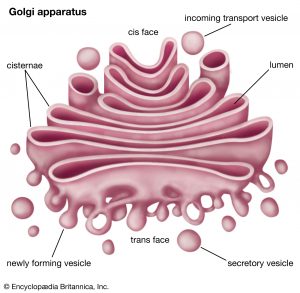 Golgi apparatus is a stack of flattened membrane bound vesicles that functions in the storage, modification and repackaging of manufactured biochemical substances in the cell. This organelle was discovered by an Italian scientist called Camillo Golgi while investigating the nervous system in 1879, the organelle was named after him in 1898.

Golgi apparatus is divided into two types based on their location in the cell into:

First the endoplasmic reticulum package protein, lipids and other biochemical  substances into vesicles and releases these vesicles into the Golgi apparatus which modifies and repackage the proteins and lipids into vesicles and them release them to go into: