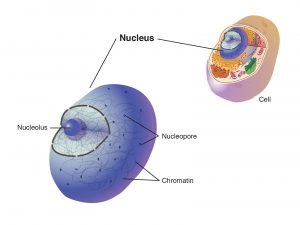 The nucleus is a membrane bound organelle found only in eukaryotic cells. However, it is not to be confused with nucleoid, a non-membrane bound genetic materials found in prokaryotes.

Structure of the nucleus

The nucleus of eukaryotic cells is made up of the following:

This is similar to the cytoplasm in living cells. It is the portion of the nucleus where chromosomes and nucleolus are found.

Chromosomes are structures in the nucleoplasm composed of chromatins, that carries the genetic information of the cells as well as the protein called histone.

This is the site of rRNA synthesis and ribosome assembly in the nucleus.

This is a network of intermediate filaments called lamins, that protect and give the nucleus it mechanical support.

Functions of the nucleus