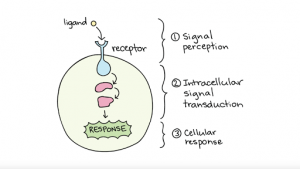 It is surprising, yet interesting to note that cells communicate with one another in a process known as cell signalling. Just as humans communicate by speaking, fowls by cocking, cats by mewing and dogs by barking. In cell signalling, a cell produces ligands (complex molecules of atoms) that binds specifically to the receptor on the recipient cell. The binding of the ligands released by one cell to the receptor site on the surface of the recipient cell elicits a reaction within the later. For communication (Signaling) to occur in living cells, there must be ligand-receptor compatibility. Ligand- receptors in cells exist in a lock and key model.

The ability of cells to interact with one another within our body helps in tissue repair, regulation of substances in our body and immune response. Error in cell signalling has been implicated with life-threatening diseases such as cancer, diabetes and autoimmunity.

It should, therefore, be noted that communication (Signaling) between cells is proportional to the distance between adjacent cells involved in signalling.

This occurs in a situation whereby the signals produced by a particular cell elicit a response within the cell producing it.

Signals are transmitted from cells-to-cell in close contact. This occurs often in animal cells via gap junctions and in plants through plasmodesmata.