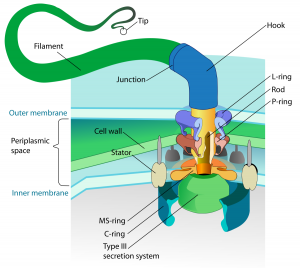 Flagellum means whip in Latin. It is a whip-like appendage found on cell surfaces of archaea, bacteria and protozoans. Flagella in these cells are used mainly for locomotion. However, flagella (plural) is not to be confused with pili

Flagellated bacteria are classified into four based on the position of the flagella on their cell wall into the following:

Archaeal flagella is similar in all respect to bacterial flagella, it is also made up of protein sub-unit called flagellin except that it has a type-iv pilus-like structure.

The flagellum is made up of three distinct parts: filament, hook and basal body. The filament is the whip-like part of the flagella, while the hook as the name implies attach the filament to the basal body of the microorganism. The basal body is the body of the archaea, bacteria or protozoan where the filament protrudes. The major difference between the prokaryotic and eukaryotic organisms is that; prokaryotic cells flagella are made up of protein sub-unit called flagellin while protozoan flagella are made up of proteins called microtubules

Flagellum is used mainly for locomotion in prokaryotes as well as sensation, signal transduction, adhesion. It is also said to be a virulence factor. For instance, Helicobacter pylori, the causal agent of gastric ulcer moves toward the intestinal lining of human where it causes damage to the epithelium with the aid of its flagella.