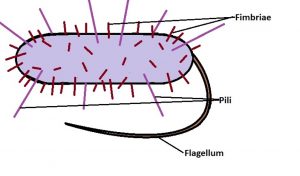 Pilus- latin name for “Hair” is a hair-like cell wall appendage found on the surfaces of many prokaryotes (especially bacteria).  Pili (plural of Pilus) is shorter and thinner than flagella (another important bacterial cell wall appendage).

The bacterial pili are of two types:

During the horizontal gene transfer process called bacterial conjugation, extrachromosomal DNA called plasmid is transferred from the donor bacterium (F+) to the recipient bacterium (F–). This is done by cell to cell contact of implicated bacteria. The pili involved conjugation are usually called sex pili. Examples of bacteria that use conjugation as their mode of gene transfer are Bacillus sp., Enterococcus faecalis, Escherichia coli and Staphylococcus species

A short pilus called Fimbria – latin name for “fringe” is used for attachment to surfaces of host by bacteria and during biofilm production.  Pili is also referred to as a virulence factor in pathogenic bacteria strains as it enables such bacteria (e.g E. coli and Vibrio cholerae) to adhere to the receptor on the surface of their host and cause disease.