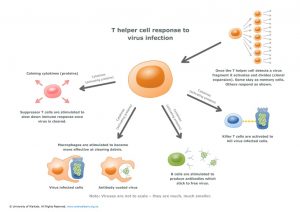 Reinforcement, the use of machinery and the opt for the use of sophisticated weapons perhaps every General’s best strategy for putting an end to a lingering war. The second line of defense is also known as the adaptive immune system.

We hereby urge  our readers to read our previous articles: Introduction to immunology and immunology: first line of defense for better understanding and before continuing in this article

The neutrophils and monocytes

The neutrophils and monocytes which have phagocytic abilities are usually the first set of white blood cells to recognize invading bacteria. Often times, they kill the ingested microorganisms through the production of hyper-reactive types of oxygen (peroxides, superoxides) as well as the secretion of enzymes that altogether kill invading  bacteria. However, in most cases, they present the bacteria antigen on their surface in form of (Major Histocompatibility complex I or II) and  release cytokines (interleukins), a chemical substance that causes the T- cells to come to the cells and do the final blow on the bacteria antigens.

The lymphocytes such as the B-cells, the T-cells and the natural killer cells also play a vital role in the body’s second line of defense.

Memory B-cells  and Memory T- cells stores the information against similar microorganisms and prevent invasion by such a microorganism attack in the future. Once the body comes across such microorganism in future it produces an elevated attack on the microorganisms, this, leading to quite an elimination of such bacteria. This explains the reason why an individual that survives measles and chicken pox disease and usually immune to the subsequent outbreak of such disease.

The Natural Killer cell is another type of lymphocytes that targets and destroys cells infected with viruses and abnormally growing cells.