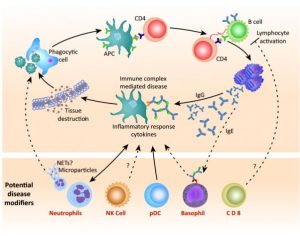 Every empire needs gallant soldiers to keep their cities from invasion and if peradventure invaded needs soldiers to suppress intruder’s proliferation. Immunology is the study of the immune system, it deals with how the natural body soldiers help to fight and eliminate intruders (microorganisms) that causes diseases in our body.

The human body is composed of many systems: circulatory system, digestive system, nervous system, respiratory system together with the immune system.

For the sake of easy understanding, the following sub-topics will be explained

The organs producing white blood cells in the human body are also referred to as primary lymphoid organs.

Examples of such these organs include:

White blood cells are stored and activated in the lymphatic tissues. Examples of such tissues include: appendix, lymph node, tonsil and adenoids, spleen and Peyer’s patches tissues.

The Peyer’s patch is found in the lowest portion of the small intestine (in the jejunum, ileum and duodenum). It stores the lymphocytes that fight against pathogenic microorganisms entering into the intestine.

Tonsils and adenoids are located at the back of our  throat. They are round lumps of tissue that can be seen when one opens one’s mouth white blood cells are stored in this tissue, tonsil and adenoid help to trap and eliminate bacteria and viruses entering the body through the mouth and nose before they can reach the other parts of the body.

Eosinophils are known for primarily fighting intestinal parasites such as flatworm and roundworm.

Example of neutrophils are phagocytes that move toward intruding bacteria and ingest them. See phagocytosis

Basophils, on the other hand, are found at the cite of body ectoparasite (e.g. tick) They fight against ectoparasite and help in their elimination in our body.

Monocytes, on the other hand, recognizes pathogens using the complement system follower by subsequent phagocytosis.

Lymphocytes include the T-cells, B-cells, and Natural killer cells (NK-cells)

Immunodeficiency can also be caused by viral infection(HIV/AIDS) that leads to T-cell deficiency and Age (the number of immune cells produced in the body decreases with age).

How to improve our immune systems

Immune system functions in our body can be improved by avoiding tobacco intake, taking diet high in fruits and vegetables, regular exercise, avoiding excessive intake of alcohol, and getting adequate rest as well as good personal hygiene.