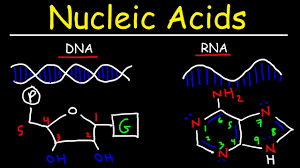 Nucleic acid is the general term for both DNA (Deoxyribonucleic acid) and RNA (Ribonucleic acid). It is a biomolecule found in all living organism that stores genetic information which is transferred from parents to their offspring from one generation to another.The major cause of the resemblance between parents and their children are information stored in the nucleic acid.  Nucleic acid is made up of monomers called nucleotides.

Nucleotides are made up of three major components:

These are aromatic nitrogen containing molecular components of nucleic acid that serves as proton acceptor. The nitrogenous bases in nucleic acid include:

Differences between the DNA and RNA