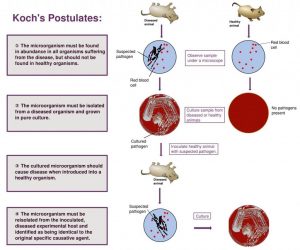 German physician Robert Koch (1843–1910) demonstration the first direct of the role of bacteria in causing disease. Koch injected healthy mice with material from diseased animals, and the mice became ill. After transferring anthrax by inoculation through a series of 20 mice, he incubated a piece of spleen containing the anthrax bacillus in beef serum. The bacilli grew, reproduced, and produced endospores. When the isolated bacilli or their spores were injected into healthy mice, anthrax developed. His criteria for proving the causal relationship between a microorganism and a specific disease are known as Koch’s postulates. Koch’s proof that B. anthracis caused anthrax was independently confirmed by Pasteur and his coworkers. They discovered that after burial of dead animals, anthrax spores survived and were brought to the surface by earthworms.

Healthy animals then ingested the spores and became ill. After completing his anthrax studies, Koch fully outlined his postulates in his work on the cause of tuberculosis.

Koch’s Application of His Postulates Demonstrated That Mycobacterium

tuberculosis Is the Causative Agent of Tuberculosis

Although the criteria that Koch developed for proving a causal relationship between a microorganism and a specific disease have been of great importance in medical microbiology.

A Molecular Approach to Koch’s Postulates