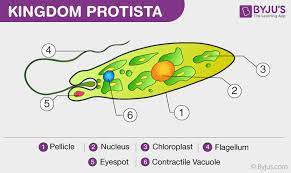 Kingdom Prokaryotae is made up of organisms known as bacteria. Bacteria have an average size of 0.5-10ʮm in size and are mainly unicellular in nature. It is believed that they came into existence 3.5million years ago. prokaryotes replicate by binary fission and possess 70S (50S and 30S according to Svedberg unit of sedimentation), this is one of the major difference between prokaryotes and other eukaryotes that have 80S ribosome. Bacteria have circular DNA (Plasmid) that lies free in the cytoplasm and non-membrane bound genetic material called nucleoid contrary to other eukaryotes with membrane bond genetic material called nucleus. Prokaryotes also possess cell wall made up of polysaccharides.

Kingdom Fungi: About 80,000 species has been classified under this kingdom. They are eukaryotes (with membrane bounding nucleic acid) and Cellulose cell wall containing Chitin. Organisms in this kingdom range from unicellular yeast to the large toadstool, puffball and stinkhorns. They can be found in both aquatic and terrestrial habitat, most of which are saprophytic (obtaining their nutrients from dead and decaying organic matters). The Study of organisms in this kingdom is known as Mycology.

Kingdom Plantae: Organisms in this kingdom are autotrophic and photosynthetic, meaning organisms that can manufacture the nutrients that they need by simply using sunlight and water. They are green colored multicellular organism and possess membrane bound nucleic acid.