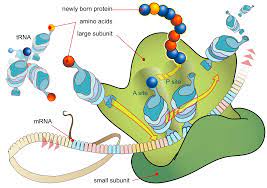 Not to be confused with Transcription

Translation is the synthesis of protein from mRNA template obtained from the transcription process. The translation process is carried out in an amino acid polymerizing organelle called ribosome. Translation marks the completion of the process of gene expression.

Proteins perform various activities in the body and are classified based on their functions in living cells into antibodies that fight infections within our body, enzymes that speed up chemical reactions within the cells, structural proteins such as collagen, keratin and elastin that provide structural support for the bone, skin and tendons respectively, contractile proteins such as actin and myosin found in the muscles, hormones that regulates the activities of the body organs, storage proteins such as ferritin which stores iron and ovalbumin that help store amino acids and transport proteins that help transports biochemical molecules from cell to cell.

There are three types of RNAs: tRNA, mRNA and rRNA.

Difference between RNA and DNA

Difference between tRNA, mRNA and rRNA

mRNAs are made from DNA template during transcription, which later serves as a template for protein synthesis. tRNAs perform a vital role in translation, it carries anti-codons that are complementary to the codon on the mRNA during protein synthesis. rRNAs are abundant in the ribosome, they together with protein make up the cell organelle called ribosome.

However, another major difference between these RNAs is their post-transcriptional modification. For example, mRNAs are methylated at the 5’ end and modified at 3’ end with multiple Adenine ( 5’- methylated cap and poly-A tail at 3’ end).

While tRNAs have CCA 3’ end that may be modified by methylation.

Codons are a set of three adjacent nucleotide bases found on the mRNA that code for a specific amino acid. It is to be the noted that there are 64 known possible codons in mRNA. 61 of which codes for amino acids. Codon AUG or GUG which codes for Methionine and Valine respectively are the start codons in living thing while UAG, UAA and UGA are the stop codons.

The mRNA, the substrate for translation have a unique 3’ ends called the Poly-A tail. mRNA also contains codons that codes for specific amino acids. At the 5’ end is a methylated cap.

The process is broken into three stages:

Initiation in translation begins when the small subunit of the ribosome attach to the methylated cap (5’ end) of the mRNA and moves towards the initiation site of the mRNA that has codon (AUG). This is followed by the binding of tRNA molecule containing the anti-codon (UAC) that is complementary to the AUG codon which it binds. Attached to the tRNA at the initiation site is an amino acid called methionine. The attachment of tRNA to an amino acid group is mediated by an enzyme called aminoacyl tRNA synthetase

The large subunit then binds to the small subunit of the ribosome to create a peptidyl (P) site. The first tRNA occupies the peptidyl (P) site. The second tRNA occupies the Aminoacyl (A) site that is complementary to the second codon. The methionine attached to the initiation tRNA is then transferred to the amino acid carried by the tRNA in the A site while it exits the ribosome.

The ribosome moves along the mRNA while the next tRNA binds the next codon on the mRNA. These are the basic steps of elongation. As elongation continues the growing peptide is transferred to the tRNA at the A-site and moves to the P-site and exit through the E site of the ribosome while a new tRNA enters. The polypeptide chain of amino acids is produced at the elongation stage of translation through the help of an enzyme called peptidyl transferase.

When a stop codon (such as UAG, UAA or UGA) is encountered on the mRNA on the A-site of the ribosome. Release factors are released, thus, leading to the termination of the translation, the ribosome subunits dissociate and a new protein is released.